Your questions and answers.

Do you have questions? Leave a comment with your question(s) and come back to this website in a couple days and you could find your question and answer (some questions may not be able to be answered).

Why do sharks attack people?

Well, sharks attack us because they mistake us for seals, their favorite meal. They don't have very good eye sight so they use their senses to find their prey. They can detect the electric fields our bodies give off, they can also smell blood from about a mile away, and they can also detect movement of struggling or moving animals. If you are bleeding or splashing or doing stuff that attract sharks, the shark(s) are sure to investiagate and to find out what is food or not food, they must taste it. If you are in murky water or in the water at night the sharks can't make out what they are about to attack.

Do Great White Sharks Really Jump Into The Air? 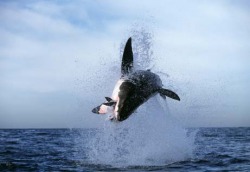 Yes, Great White Sharks jump into the air (left). At seal island, in South Africa, groups of great white sharks gather. When seals swim out into the ocean the great whites follow them from below and then at the right time, BAM, they swim directly upward towards the seal, picking up speed. Then they jump out of the water, catching the seal (sometimes missing), and falling back into the water. It is amazing, they do summersalts, and flips, and a whole bunch of acrobatic things while in the air.

What is the largest shark?

The largest shark is the whale shark! It is completely harmless to people. It has no teeth because the Whale Shark is a filter feeder. It swims through the water with its mouth wide open. It feeds on plankton so as it swims water and plankton are sucked into its mouth. The plankton is swallowed and the water is filtered out through its gills. The Whale Shark reaches to lengths more than 60 feet long!

What is the smallest shark?

The smallest type of shark is the (deepwater) Dogfish Shark. It is about 8 inches long.

How many kinds of sharks are there?

There are approximately 400 species of sharks that exist at this moment. But there may be more species that we haven't discovered yet!

Do sharks have bones?

No, sharks do not have (true) bones. Instead they have cartilaginous skeletons. Cartilage is strong, connective tissue that is softer than actual bone (bones that make up our body). An example of cartilage is the our nose and ears.

Can sharks see in color?

Yes, sharks can see in color!

How do sharks benefit our waters?

Sharks eat dead and dying fish that could pollute our waters.They also keep the fish, seal, sea turtle, and other sea animal populations from getting out of control. If the sharks were to disappear, the populations of the animals they use to eat would increase which would decrease the populations of fish that we eat like lobster.

Can sharks live in Lake Michigan?

It is possible for sharks to live in Lake Michigan. But there is only ONE species of shark that CAN live in fresh water. The Bull Shark can live in fresh water but only for a certain amount of time. They have been found in the Mississippi River as far up to as Illinois. So far they have not been farther up at least that we know of.

How long have sharks been on the planet?

Sharks have been on the earth for approximately 400 million years

Would you go swimming with sharks?

If I got a chance to go swimming with sharks, I would! I would of course be in a shark cage until/if I felt comfortable enough to swim freely with them! I would want to go in a shark cage at an aquarium before I went into the real water!

Is there a shark repellent?

There have been tests on shark repelents! Small magnets repel small sharks. A spray repellent has been tested on bigger sharks and it had worked, but I am not quite sure if you can buy it yet!

What is the fastest shark?

The fastest shark is the shaort fin mako shark.

How long have sharks been on the earth?

Sharks have been on the earth for approximately 400 MILLION years!

No, sharks do not blink. Sharks do have upper and a lower eyelids but they do not use them. Most sharks have a third eyelid! This eyelid is called nictitating membrane and is used to protect their eyes when they attack their prey.

Why do Great White Sharks Breach?

Great White sharks breach because it is part of their hunting behavior. There is only one place where you can view this magnificent act; False Bay in Cape Town, Africa. (Although I believe it was achieved off of the coast of California on a television show I viewed during Shark Week on animal planet.) (http://www.sharks.org.za/africas-flying-sharks.html -this website will give more information to Great White sharks breaching). This method of hunting gives the element of surprise. The seal doesn't see the shark so it is less likely to get away. The top of the shark is dark so if you were to look down in the water the shark would blend in, same as if you looked up from below a Great White Shark; its belly is light so it would blend in with the surface of the water.

I wish I could tell you what it's like to swim with sharks, but I have yet to experience that. I'm sure it is thrilling and scary at the same time, but you'll most likely be glad you did it! I would like to cage dive with sharks and maybe even swim freely with one someday, but I haven't yet.